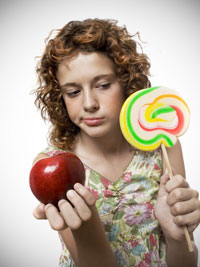 When people contact me for help with ADHD, one of the things I tell everyone is, "Eliminate artificial colorings and ingredients from the diet".

I know that artificial ingredients cause a lot of problems for people.

I read an article today from the Associated Press that says, "Agency: Food coloring may stimulate kids".

Duh! I have been telling people to eliminate it from their diet.

The article also says that it isn't soley the dyes that are causing problems. This is why I say a total diet change. Fresh foods. Stay away from the frozen foods and processed stuff. Fresh as possible.

The article also says, "Such additives are most likely to be found in foods that we would like to see children eating less of - i.e. soft drinks, confectionery and so on - and so it reiterates the general healthy eating messages of encouraging healthier food choices".

The dyes they did testing with are the following:
"Some were given a mixture including four colorings - sunset yellow, carmoisine, tartrazine and ponceau - and sodium benzoate."

"A second group was given the preservative sodium benzoate and four colorings - sunset yellow, carmoisine, quinoline yellow and allura red."

The other side of things is the deficiencies and I don't mean attention. I am talking about the proper nutrition for the body.

People with ADHD are mineral deficient and need a good source of minerals. It is very difficult a good supplement that has minerals small enough and in a form usable by the body.

That is why I am having so much success with the one I am using. It is in an excellent form for the body and the minerals are small enough for the cells to assimilate them.

Change your diet, add an excellent supplement like the one I use, and feel and function better.